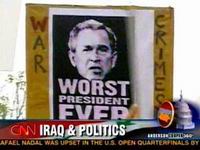 Americans are shopping while Iraq burns.

The competing television news images on the morning after Thanksgiving were of the unspeakable carnage in Sadr City — where more than 200 Iraqi civilians were killed by a series of coordinated car bombs — and the long lines of cars filled with holiday shopping zealots that jammed the highway approaches to American malls that had opened for business at midnight.

A Wal-Mart in Union, N.J., was besieged by customers even before it opened its doors at 5 a.m. on Friday. “All I can tell you,” said a Wal-Mart employee, “is that they were fired up and ready to spend money.”

There is something terribly wrong with this juxtaposition of gleeful Americans with fistfuls of dollars storming the department store barricades and the slaughter by the thousands of innocent Iraqi civilians, including old people, children and babies. The war was started by the U.S., but most Americans feel absolutely no sense of personal responsibility for it.

Representative Charles Rangel recently proposed that the draft be reinstated, suggesting that politicians would be more reluctant to take the country to war if they understood that their constituents might be called up to fight. What struck me was not the uniform opposition to the congressman’s proposal — it has long been clear that there is zero sentiment in favor of a draft in the U.S. — but the fact that it never provoked even the briefest discussion of the responsibilities and obligations of ordinary Americans in a time of war.

With no obvious personal stake in the war in Iraq, most Americans are indifferent to its consequences. In an interview last week, Alex Racheotes, a 19-year-old history major at Wesleyan University in Connecticut, said: “I definitely don’t know anyone who would want to fight in Iraq. But beyond that, I get the feeling that most people at school don’t even think about the war. They’re more concerned with what grade they got on yesterday’s test.”

His thoughts were echoed by other students, including John Cafarelli, a 19-year-old sophomore at the University of New Hampshire, who was asked if he had any friends who would be willing to join the Army. “No, definitely not,” he said. “None of my friends even really care about what’s going on in Iraq.”

This indifference is widespread. It enables most Americans to go about their daily lives completely unconcerned about the atrocities resulting from a war being waged in their name. While shoppers here are scrambling to put the perfect touch to their holidays with the purchase of a giant flat-screen TV or a PlayStation 3, the news out of Baghdad is of a society in the midst of a meltdown.

According to the United Nations, more than 7,000 Iraqi civilians were killed in September and October. Nearly 5,000 of those killings occurred in Baghdad, a staggering figure.

In a demoralizing reprise of life in Afghanistan under Taliban rule, the U.N. reported that in Iraq: “The situation of women has continued to deteriorate. Increasing numbers of women were recorded to be either victims of religious extremists or ‘honor killings.’ Some non-Muslim women are forced to wear a headscarf and to be accompanied by spouses or male relatives.”

Journalists in Iraq are being “assassinated with utmost impunity,” the U.N. report said, with 18 murdered in the last two months. Iraq burns. We shop. The Americans dying in Iraq are barely mentioned in the press anymore. They warrant maybe one sentence in a long roundup article out of Baghdad, or a passing reference — no longer than a few seconds — in a television news account of the latest political ditherings.

Since the vast majority of Americans do not want anything to do with the military or the war, the burden of fighting has fallen on a small cadre of volunteers who are being sent into the war zone again and again. Nearly 3,000 have been killed, and many thousands more have been maimed.

The war has now lasted as long as the American involvement in World War II. But there is no sense of collective sacrifice in this war, no shared burden of responsibility. The soldiers in Iraq are fighting, suffering and dying in a war in which there are no clear objectives and no end in sight, and which a majority of Americans do not support.

They are dying anonymously and pointlessly, while the rest of us are free to buckle ourselves into the family vehicle and head off to the malls and shop.