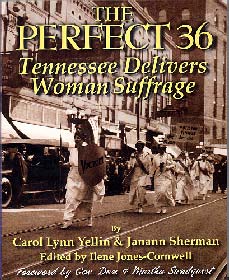 This blog received, as a donation, a number of copies of this very cool book. We are happy to promote women's history -- or herstory -- by offering them to our readers.

Mahatma Gandhi was inspired by the nonviolent civil disobedience of women. The suffrage story is one of a multitude of stories about women from the past that remains shamefully neglected by the history books of this nation.

It is doubtful that women will ever attain equality as long as we continue to be denied our rightful place in the history books. You can help promote the knowledge of the all but taboo subject of women's history, and support this blog too, by ordering your copy. (Scroll down for details.)

The Perfect 36 includes an overview of the 72 year national struggle for women's right to vote in the U.S., as well as the amazing story of the high drama final victory in Tennessee. There are lots and lots of cool graphics, including political cartoons and photos of some of my own favorite foresisters from the era, such as Alice Paul and Tennessee's own Sue Shelton White. Both women went to jail for the cause. Sue Shelton White burned President Wilson in effigy, just like any good Tennessee Guerilla Woman would!

There's a graphic depiction of a flyer announcing a meeting at the Ryman Auditorium for the purpose of Saving the South from the Susan B. Anthony Amendment! And there's a photo of a Suffrage Parade on West End Avenue, here in Nashville. The suffragists were headed for Centennial Park, which in 2006 is still a favored site for social justice activists.

The book includes a nice long list of kick-ass Tennessee foresisters from across the state, dubbed "The Suffrage Roll of Honor." The honor roll includes Mary Church Terrell and Ida B. Wells of Memphis, Abby Crawford Milton of Chattanooga, Lizzie Crozier French of Knoxville, Sue Shelton White of Jackson and many more.

Simply make a donation of $30.00 via the Paypal link over in the sidebar (near the top), and email me your mailing address info and/or any questions.

Thanks to Paula F. Casey and Jan Sherman for this very kind and thoughtful donation.