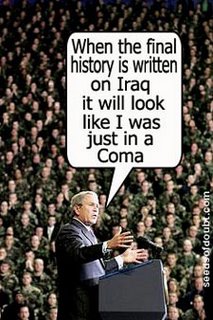 In today's Washington Post, Chuck Hagel says it's time to get the hell out. The Republican Senator from Nebraska calls for a phased withdrawal of troops from Iraq.

Senator Hagel says it's too late to send more troops to Iraq because we don't have more to send. And it wouldn't do any good anyway.

Hagel does a half-decent job of summing up the Bush War as the catastrophic disaster that it is and then blows it by saying it's not too late for the U.S. to "extricate itself honorably from an impending disaster in Iraq."

Hagel in the WaPo: We have misunderstood, misread, misplanned and mismanaged our honorable intentions in Iraq with an arrogant self-delusion reminiscent of Vietnam. Honorable intentions are not policies and plans. Iraq belongs to the 25 million Iraqis who live there. They will decide their fate and form of government.

America finds itself in a dangerous and isolated position in the world. We are perceived as a nation at war with Muslims. Unfortunately, that perception is gaining credibility in the Muslim world and for many years will complicate America's global credibility, purpose and leadership. This debilitating and dangerous perception must be reversed as the world seeks a new geopolitical, trade and economic center that will accommodate the interests of billions of people over the next 25 years. The world will continue to require realistic, clear-headed American leadership -- not an American divine mission.

The United States must begin planning for a phased troop withdrawal from Iraq.

Graphic via Seeds of Doubt