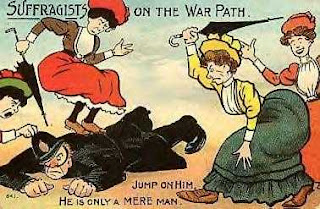 The Pennsylvania campaign, which produced yet another inconclusive result on Tuesday, was even meaner, more vacuous, more desperate, and more filled with pandering than the mean, vacuous, desperate, pander-filled contests that preceded it.

Voters are getting tired of it; it is demeaning the political process; and it does not work. It is past time for Senator Hillary Rodham Clinton to acknowledge that the negativity, for which she is mostly responsible, does nothing but harm to her, her opponent, her party and the 2008 election.

In other words, Why won't the bitch quit? What voters are really getting tired of is the Whining Obama News Network!

Most ironic of all is the fact that the New York Times once opposed women's suffrage along with the vast majority of the boy media because politics was too mean and nasty for the sweet and delicate little women. The thought being that if women were ever allowed to participate in politics, it would simply be too hard on the men, because the little docile angels might become mean like the menz!! Or as the Anti-Suffrage Review opined in 1910:

Woman, as mother, sweetheart, inspirer and friend, man accepts and welcomes. But once she begins to invade his province, to do his work – then his latent jealousy will burst into flame, and everywhere there will be a great revolt.

So now the boy media is revolting ad nauseam and complaining that the bitch is mean!!!

The comments at the revolting New York Times are closed. Probably some of them were mean. Contact the Times at the addresses below, but do be careful women, don't be mean! You might make somebody cry.

Progressive Involvement: Who wrote that stupid New York Times editorial?
TalkLeft: NYTimes Jumps the Gun: Does Not Wait For The Votes
Shakesville: I Write Letters
Buck Naked Politics: Apparently, the person who wrote that editorial hadn't read the New York Times two days ago, when the Times slammed Obama for going negative in Pennsylvania.

Graphic: "This cartoon (drawn by a man) stereotypes Suffragettes as bitter old crones engaged in a gender-war against men."