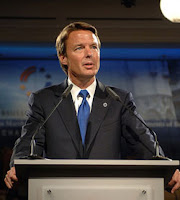 The majority of the netroots is rooting for John Edwards in tonight's Democratic Presidential Debate, according to an informal poll over at dkos.

But that's no surprise.

Time and time again, John Edwards has led on issues crucial to the base. Obama and Clinton have sometimes followed his lead; other times they have not. While polls among the general population find Clinton in first place, Obama in second and Edwards in third, that is far from the case when it comes to the netroots.

The dkos poll results are in line with virtually every netroots poll I've seen.

Who are you rooting for in tonight's Democratic presidential debate?

Hillary? Trailing behind Dennis Kucinich, Senator Clinton is #6 with 3 percent.

Go vote in the dkos poll. (Thanks to Bill in Portland Maine!)