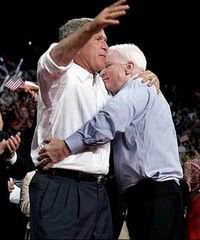 The Real McCain
by Paul Krugman

It's time for some straight talk about John McCain. He isn't a moderate. He's much less of a maverick than you'd think. And he isn't the straight talker he claims to be.

Mr. McCain's reputation as a moderate may be based on his former opposition to the Bush tax cuts. In 2001 he declared, "I cannot in good conscience support a tax cut in which so many of the benefits go to the most fortunate among us."

But now — at a time of huge budget deficits and an expensive war, when the case against tax cuts for the rich is even stronger — Mr. McCain is happy to shower benefits on the most fortunate. He recently voted to extend tax cuts on dividends and capital gains, an action that will worsen the budget deficit while mainly benefiting people with very high incomes.

When it comes to foreign policy, Mr. McCain was never moderate. During the 2000 campaign he called for a policy of "rogue state rollback," anticipating the "Bush doctrine" of pre-emptive war unveiled two years later. Mr. McCain called for a systematic effort to overthrow nasty regimes even if they posed no imminent threat to the United States; he singled out Iraq, Libya and North Korea. Mr. McCain's aggressive views on foreign policy, and his expressed willingness, almost eagerness, to commit U.S. ground forces overseas, explain why he, not George W. Bush, was the favored candidate of neoconservative pundits such as William Kristol of The Weekly Standard.

Would Mr. McCain, like Mr. Bush, have found some pretext for invading Iraq? We'll never know. But Mr. McCain still thinks the war was a good idea, and he rejects any attempt to extricate ourselves from the quagmire. "If success requires an increase in American troop levels in 2006," he wrote last year, "then we must increase our numbers there." He didn't explain where the overstretched U.S. military is supposed to find these troops.

When it comes to social issues, Mr. McCain, who once called Pat Robertson and Jerry Falwell "agents of intolerance," met with Mr. Falwell late last year. Perhaps as a result, he is now taking positions friendly to the religious right. Most notably, Mr. McCain's spokesperson says that he would have signed South Dakota's extremist new anti-abortion law.

The spokesperson went on to say that the senator would have taken "the appropriate steps under state law" to ensure that cases of rape and incest were excluded. But that attempt at qualification makes no sense: the South Dakota law has produced national shockwaves precisely because it prohibits abortions even for victims of rape or incest.

The bottom line is that Mr. McCain isn't a moderate; he's a man of the hard right. How far right? A statistical analysis of Mr. McCain's recent voting record, available at www.voteview.com, ranks him as the Senate's third most conservative member.

What about Mr. McCain's reputation as a maverick? This comes from the fact that every now and then he seems to declare his independence from the Bush administration, as he did in pushing through his anti-torture bill.

But a funny thing happened on the way to Guantánamo. President Bush, when signing the bill, appended a statement that in effect said that he was free to disregard the law whenever he chose. Mr. McCain protested, but there are apparently no hard feelings: at the recent Southern Republican Leadership Conference he effusively praised Mr. Bush.

And I'm sorry to say that this is typical of Mr. McCain. Every once in a while he makes headlines by apparently defying Mr. Bush, but he always returns to the fold, even if the abuses he railed against continue unabated.

So here's what you need to know about John McCain.

He isn't a straight talker. His flip-flopping on tax cuts, his call to send troops we don't have to Iraq and his endorsement of the South Dakota anti-abortion legislation even while claiming that he would find a way around that legislation's central provision show that he's a politician as slippery and evasive as, well, George W. Bush.

He isn't a moderate. Mr. McCain's policy positions and Senate votes don't just place him at the right end of America's political spectrum; they place him in the right wing of the Republican Party.

And he isn't a maverick, at least not when it counts. When the cameras are rolling, Mr. McCain can sometimes be seen striking a brave pose of opposition to the White House. But when it matters, when the Bush administration's ability to do whatever it wants is at stake, Mr. McCain always toes the party line.

It's worth recalling that during the 2000 election campaign George W. Bush was widely portrayed by the news media both as a moderate and as a straight-shooter. As Mr. Bush has said, "Fool me once, shame on — shame on you. Fool me — you can't get fooled again."