Pro Choice MTSU Students Protest the Presence of the Sneaky Abortion Propaganda Project that Doubles as a Lame Wannabe Horror Show, aka the Ludicrous and Laughable "Genocide Awareness Project"

The deceptive and secretive "Genocide Awareness Project" sneaks into another Tennessee University with no warning, no prior notice, no publicity. 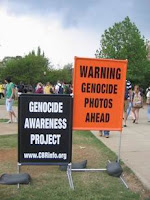 The woman-hating back-to-the-19th-century anti-choice group will be on the campus of the University of Tennessee-Knoxville on September 13, 14 and 15 (9am-4pm).

There will be counter demonstrations. If you are there, send me photos!

Warning: lots of fake blood and phoney photos -- if you can't stomach Grade B horror movies, don't go there. Otherwise, it's hilarious! 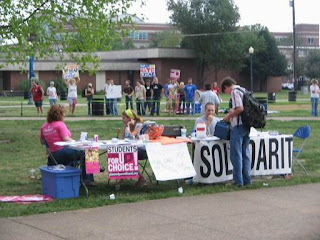