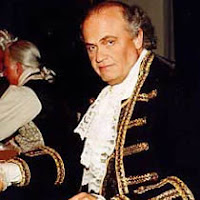 Republicans Call Fred Thompson a Pimp, a Moron, a Playboy, a Pro-choice Skirt Chaser and More -

The juveniles in the Mitt Romney camp appear to be behind a ridiculous website -- PhoneyFred.org -- with the goal of attacking and taking Fred Thompson down by calling him a moron and a pimp.

The site sure wasn't created by grown-ups. Pimp Fred, Moron Fred, Pro-Choice Skirt Chaser, Son-of-a-Fred? Good gawd. Now I remember why the Republican Party is such a miserable failure at everything it touches.

Can we expect to see some new Freddie Thompson bumper stickers?

Shortly after a Washington Post reporter made inquiries about the site to the Romney campaign, the site was taken down.

Before it vanished, the front page of the website featured a picture of a regal Thompson dressed in a frilly outfit more befitting a Gilbert and Sullivan production than a presidential campaign. Under the heading, "Playboy Fred," the site asks the question: "Once a Pro-Choice Skirt Chaser, Now Standard Bearer of the Religious Right?"