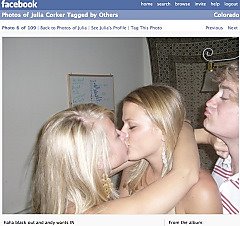 Bob Corker's been bragging a lot about his wholesome family. Just the other night he was trying to make Harold feel bad for being a bachelor.

Nobody really cares who your daughter kisses unless you are a holy family values candidate for the U.S. Senate who uses homophobia as campaign strategy.

In one of Republican Bob Corker's latest campaign ads for the U.S. Senate race, he introduces his daughters, Emily, 17, and Julia, 18, who predictably gush about their daddy.

It's good for his wholesome, traditional, conservative Christian family image, but Julia's picture on the Facebook Web site, not so much.

Julia's near menage a trois has been bandied about the blogosphere for months, but it didn't seem to be particularly newsworthy. That was before the pic reappeared on wonkette.com last week, and Corker, who has repeatedly ragged on his opponent's family, brought his daughters into the race with the campaign ad invitation to meet his girls.

Junior's campaign is not helped one whit by his family's antics, past and present.

But will the conservatives who believe homosexuality to be an abomination be turned off by the same-sex exploration of Corker's college-age daughter?

Will Corker's base question his parenting skills, given that he didn't teach his teenage daughter not to share her kissy-face moments on the Web with the world, especially not when daddy is trying to run a conservative campaign?

The sexual orientation or legal sexual activities of the candidate or his family don't matter -- unless you've been courting the vote of people who oppose same-sex marriage and all things gay and lesbian. Then they do.

Via Wonkette, and yeah, we had the story too: Bob Corker's Daughter Strikes Blow for Gender Justice