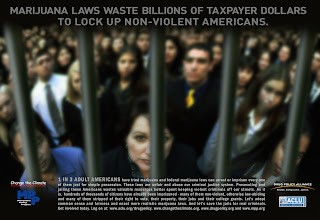 Eric Holder, Obama's pick for Attorney General is reportedly an "extreme drug warrior" whose rhetoric on marijuana use is "indistinguishable" from "the most zealous Republican drug warrior."

This record appears to be from the mid 1990s, so some cling to the hope that Bolder has since changed, but not changed like Obama has changed. In 2004, Obama supported marijuana decriminalization, but then in 2007, Obama changed.


On the up side, Holder is said to be no friend to gun owners.

Will Foster, a rheumatoid arthritis sufferer and father of two, was sentenced to 93 years in prison for charges relating to the 25-plant medical marijuana garden he grew in a locked room in his basement.

Tyrone Brown served 17 years of a life sentence for testing positive for marijuana while on probation for a $2 stickup committed when he was 17. No one involved was ever able to explain the severe penalty.