Invasion of the Mind Snatchers: One Nation, Under a New Obama Salute 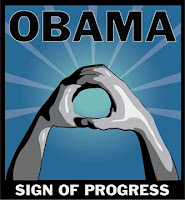 If you think the punishment for not drinking the Obama kool-aid is already excessive, well, you might want to start practicing walking and talking like an Obama zombie before it gets even worse.

And, no, this does not appear to be satire:

George Bush had his three-fingered W salute that supporters flashed when greeting him at presidential campaign events in 2000. And now, if a Los Angeles creative agency gets its way, Sen. Barack Obama will see fans meet him with his own salute like the one above. "Our goal is to see a crowd of 75,000 people at Obama's nomination speech holding their hands above their heads, fingers laced together in support of a new direction for this country . .

"We thought, 'Let's try and start a movement where even while walking down the street, people would hold up the O and you would know that they were for Obama.'"