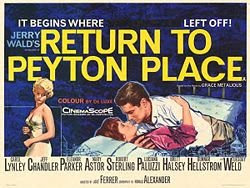 John Edwards admitted today that he had an extramarital affair with Rielle Hunter. Exactly why we need to know this is beyond me. I guess it has something to do with an all consuming need to snoop into people's private sex lives and thereby magnify the pain of people like Elizabeth Edwards and her small children. Thankfully, we have a really sick media to assuage our really sick needs.

Gee, maybe the Edwards do not require sexual fidelity from each other. But don't tell that to the morality-policing tabloid media, else you might ruin their Big Shocking Sex Scandal Story. Right now on MSNBC, a reporter from the National Enquirer is telling salivating David Shuster all about how Edwards needs to take a paternity test to be administered by the media!

Gawd. And who will look into the private sex lives of David Shuster, Chris Matthews, and Keith Olbermann?

Like a lot of folks, I've been watching this latest Supermarket Tabloid Story travel around the internet for the last few weeks, just waiting for the Mainstream Tabloid Media to pounce. Today's the day:

John Edwards repeatedly lied during his Presidential campaign about an extramarital affair with a novice filmmaker, the former Senator admitted to ABC News today. In an interview for broadcast tonight on Nightline, Edwards told ABC News correspondent Bob Woodruff he did have an affair with 44-year old Rielle Hunter, but said that he did not love her.

Edwards also denied he was the father of Hunter's baby girl, Frances Quinn, although the one-time Democratic Presidential candidate said he has not taken a paternity test.