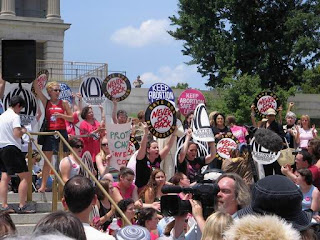 Tennessee's women-hating lawmakers are at it again. Trying to put an anti-choice amendment into the state constitution is a yearly ritual for lawmakers in Tennessee. This year the famed SJR127 is sponsored by Senate Republican Caucus Chairman Diane Black of Gallatin.

As the ritual goes, the measure passes in the rabidly conservative senate and fails in a pro choice committee in the House.

The rightwing effort to control women reads, "Nothing in this Constitution secures or protects a right to abortion or requires the funding of an abortion." (pdf]

If that's not the definition of misogyny, I don't know what is.

The bill has been referred to the Senate Judiciary Committee, but has not yet been placed on the calendar. [via C. E. Petro ]

Contact the members of the Senate Judiciary Committee and urge them to vote no when the bill comes before them. If you get a response, send it to me. Committee members -- Mae Beavers, Chair; Doug Jackson, Vice-Chair; Jamie Woodson, Secretary; Diane Black; Shea Flinn; Jim Kyle; Mark Norris; Paul Stanley; and John Wilder.

Photo by Jesse, NOW protest at the Capitol in Nashville, Tennessee, 2005, [which was snubbed by the Tennessean].