MSNBC is doing the world a favor and dropping its two most popular sexist jerks from their gigs as anchors of live political events. The self-centered opinionated woman-hating duo will be replaced by David Gregory during the upcoming presidential and vice presidential debates and on election night.

This means some women might actually tune in to the misogyny channel. Or not!

Let's not forget that Keith Olbermann is the low-life Rush Limbaugh clone who said this about Senator Hillary Rodham Clinton:

Because a senator - a politician - a person - who can let hang in mid-air the prospect that she might just be sticking around in part, just in case the other guy gets shot - has no business being, and no capacity to be, the President of the United States.

And then the infamously 'above the fray' Obama campaign promptly distributed Olbermann's shock jock hysteria to the media. Keith Olbermann and Chris Matthews will continue in their arrested development role as analysts and so will be free to continue their mission of making sure MSNBC sinks to all the same lows as Fox News, only with a lot more misogyny. But Matthews and Olbermann will no longer have total control of the prime time political news coverage -- like Bill O'Reilly doesn't get to be in charge of news over at Fox!

Olbermann was at the center of a number of on air spats during the recent Democratic and Republican convention coverage. Scroll down for one of his Youtube moments, and yeah, the boyz were still talking about Hillary.

When the vice presidential nominee Sarah Palin lamented media bias during her speech, attendees of the Republican convention loudly chanted “NBC.” . . In interviews, 10 current and former staff members said that long-simmering tensions between MSNBC and NBC reached a boiling point during the conventions. “MSNBC is behaving like a heroin addict,” one senior staff member observed. “They’re living from fix to fix and swearing they’ll go into rehab the next week.” 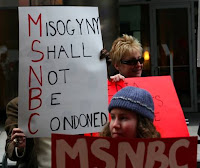 Al Hunt, the executive Washington bureau chief of Bloomberg News, said that the entire news division was being singled out by Republicans because of the work of partisans like Mr. Olbermann. . . Some tensions have spilled out on-screen. On the first night in Denver, as the fellow MSNBC host Joe Scarborough talked about the resurgence of the McCain campaign, Mr. Olbermann dismissed it by saying: “Jesus, Joe, why don’t you get a shovel?” The following night, Mr. Olbermann and his co-anchor for convention coverage, Mr. Matthews, had their own squabble after Mr. Olbermann observed that Mr. Matthews had talked too long.