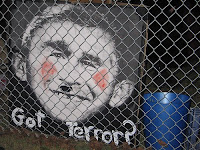 Okay, so there seems to be a theme emerging. I was thinking of impeaching Bush, but Robert Kuttner, co-editor of The American Prospect, makes an excellent case for impeaching Alberto Gonzales.

That would really piss off pResident Pissypants. And it would move so much more quickly than an impeachment of the miserable pResident. The Bushies have so much to hide. Impeaching Gonzales may well be the quickest way to bring down the whole rotten stinking house. Just think, PissyPants would be throwing tantrums almost every day. The distraction could save god knows how many lives.

THE HOUSE of Representatives should begin impeachment proceedings against Attorney General Alberto Gonzales.

Gonzales, the nation's highest legal officer, has been point man for serial assaults against the rule of law, most recently in the crude attempt to politicize criminal prosecutions. Obstruction of a prosecution is a felony, even when committed by the attorney general. . .

Why impeachment? In our system of checks and balances, the Senate confirms members of the Cabinet, but impeachment for cause is the only way to remove them. The White House, by refusing to cooperate, has now left Congress no other recourse.

. . . It's time for an impeachment, not just to oust Gonzales, but as a salutary warning to his superiors.