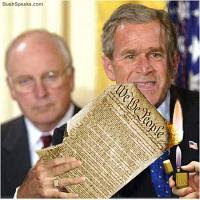 Another NY Times editorial matter-of-factly makes the obvious point that the country is ruled by a snot-nosed little pro-torture dynasty-boy who opposes everything this country once stood for.

And we're supposed to believe that the pro-torture jokester of a pResident is going to finish out his term sans impeachment hearings because the country has outrage fatigue?

George Bush does not want to be rescued. . .

Thom Shanker and David Sanger reported in Friday’s Times that in his first weeks on the job, Mr. Gates told Mr. Bush that the world would never consider trials at Guantánamo to be legitimate. He said that the camp should be shut, and that inmates who should stand trial should be brought to the United States and taken to real military courts.

Mr. Bush rejected that sound advice, heeding instead the chief enablers of his worst instincts, Vice President Dick Cheney and Attorney General Alberto Gonzales. . . It was distressing to see that the president has retreated so far into his alternative reality that he would not listen to Mr. Gates. . .

If Mr. Bush would not listen to reason from inside his cabinet, he might at least listen to what Americans are telling him about the damage to this country’s credibility, and its cost. When Khalid Shaikh Mohammed — for all appearances a truly evil and dangerous man — confessed to a long list of heinous crimes, including planning the 9/11 attacks, many Americans reacted with skepticism and even derision. The confession became the butt of editorial cartoons, like one that showed the prisoner confessing to betting on the Cincinnati Reds, and fodder for the late-night comedians. . . .

The omissions from the record of Mr. Mohammed’s hearing were chilling. The United States government deleted his claims to have been tortured during years of illegal detention at camps run by the Central Intelligence Agency. Government officials who are opposed to the administration’s lawless policy on prisoners have said in numerous news reports that Mr. Mohammed was indeed tortured, including through waterboarding, which simulates drowning and violates every civilized standard of behavior toward a prisoner, even one as awful as this one. And he is hardly the only prisoner who has made claims of abuse and torture. Some were released after it was proved that they never had any connection at all to terrorism.

Still, the Bush administration says no prisoner should be allowed to take torture claims to court, including the innocents who were tortured and released. The administration’s argument is that how prisoners are treated is a state secret and cannot be discussed openly. If that sounds nonsensical, it is. It’s also not the real reason behind the administration’s denying these prisoners the most basic rights of due process.

The Bush administration has so badly subverted American norms of justice in handling these cases that they would not stand up to scrutiny in a real court of law. It is a clear case of justice denied.