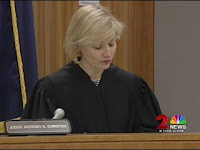 Yes! Sarah Palin chose a woman to fill the latest vacancy on the Alaska Supreme Court despite considerable pressure by the right-wing Alaska Family Council to do otherwise. The right-wing group emailed thousands of Alaskans, urging them to pressure Governor Palin to choose Judge Morgan Christen's male opponent.

Anchorage Superior Court Judge Morgan Christen is only the second woman ever named to the Alaska High Court. To make matters even more interesting, Judge Christen was on the board of Planned Parenthood in the 1990s. And Christen has served as Chair for the Federal Admiralty Rules Committee Federal/State Gender Equality Task Force, President of the Anchorage Association of Women lawyers and board member of Anchorage United Way.

Palin appointed Anchorage Superior Court Judge Morgan Christen to the state’s highest court on Wednesday. Along with Christen’s former board member status with Planned Parenthood, she was also executive director of the extreme environmental and anti development group Trustees for Alaska.

There is no disputing Palin’s appointment of Christen will cause the Alaska Supreme to lean left and will ensure a more activist court when it comes to gay marriage, and abortion. The Christen appointment is key because she replaces justice Warren Mathews, one of the dissenting votes striking down the parental consent legislation.

The Governor, who early on won the support of Alaska liberals after she pushed through an enormous, unprecedented tax increase on the oil industry, seems to be back in their good graces with this appointment. . [T]he Christen appointment proves that while the governor lives the pro-life message in her personal life, she is not willing to spend political capital on the issue in her political life.