Sarah Palin Strikes Back at Media ('KO Is Evil!') (Video) 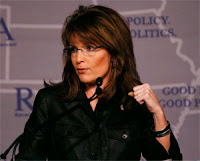 In the video-taped interview below (by the conservative John Ziegler) , Sarah Palin looks back at the classist and sexist media coverage of her historic campaign.

“Is it political? Is it sexism?” she asked. “What is it that drives someone to believe the worst and perpetuate the worst in terms of gossip and lies?”

Governor Palin talks about the outrageous attacks on her children by mainstream media. She notes that her children were deemed to be fair game, while Obama's were not. When presented with Tina Fey's famous SNL line: "Marriage is a sacred institution between two unwilling teenagers," Sarah Palin responds, "The Mama Grizzly rises up in me."

Governor Palin also touches on the subjects of Caroline Kennedy, Tina Fey, and Katie Couric. And apparently it wasn't caught on tape, but Palin calls Keith Olbermann evil. Who said this woman is dumb?


[W]hen she looked at the back cover of my first film…and saw the photo of one of the film’s targets, Keith Olbermann, she literally let out a shriek and, pointing to his photograph, declared, “THAT guy is EVIL!”