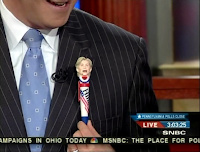 I saw this on MSNBC earlier today. And it was the best laugh I've had all week. David Shuster slugs it out with John Ziegler, the guy who interviewed Sarah Palin earlier this week. I don't know why they didn't just take it outside.

David "Pimping" Shuster is still trying hard to be the Bill O'Reilly of MSNBC! In my view, Shuster is worse than O'Reilly.

There he is in the photo playing with a Hillary pen that laughs and making crude jokes about Hillary's "cackle." Shuster doesn't like Sarah Palin, and he sure doesn't like Hillary Rodham Clinton. Like a lot of sexist men, Shuster prefers for women to be wives, not pols.

Chris Matthews, Keith Olbermann, and David Shuster, what a freaking sexist cast of characters. How can they present the news when they ARE the news?