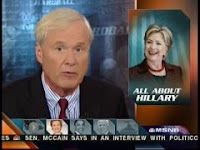 Reportedly, Chris Matthews wants to be a senator so bad he is shopping for a house in Pennsylvania, and he is thinking of quitting MSNBC. My sympathies to the folks in Pennsylvania, but if Matthews resigns, the women of America will be dancing in the streets.

We could make the day that Hillary hater Chris Matthews resigns into an Anti Misogyny Holiday. Any ideas on what we might call that glorious day?

But some say Chris is just putting on a little drama in order to "jack up" his 5 million a year contract. People say Chris won't be offered that much next time around.

The misogynist's contract with the Misogyny Network expires in June. Chris has apparently been advised that if he really wants to be a senator, he should not wait until June, he should quit MSNBC asap!

Or the woman hater could use MSNBC as his campaign headquarters. It worked so well for Obama.