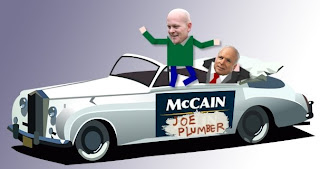 Speak your political views at your own peril. That seems to be the moral of the Joe the Plumber story. It appears that John McCain did Joe Wurzelbacher of Toledo, Ohio no favors by making him the star of the final presidential debate. The opposition research on Joe the Plumber is coming in fast and furious.

Reportedly, Joe Wurzelbacher earns a living as a plumber, but he is not a licensed plumber. Joe the Plumber objects to the Democratic progressive tax policy, but he has a lien on his house for failing to pay back taxes under the Republican regressive tax policy. (That's the regressive Republican tax policy that gives tax breaks to billionaires and taxes secretaries at a drastically higher rate than it taxes billionaires.)

Worse than that, it appears that the registered Republican would not pay any additional taxes under the Democratic progressive tax plan, instead Joe the Plumber would get a tax break.

Reporters camped out at Joe's house overnight and CNN reports that Joe Wurzelbacher's home is currently surrounded by media vultures. Blog posts condemning Joe with headlines like: Joe the Plumber-Completely Fake, Joe the Plumber, Tax Evader and Joe, the Non-Plumber are all over the net.

Oh, and the inquiring minds over at the big Orange Satan inform the world that Joe the Plumber may be related to a Keating 5 convict. Still no word on Joe the Plumber's sex scandals, but give it time, folks. Give it time.

And then there is the question: Will Joe Wurzelbacher, single father, of Toledo, Ohio ever get a job from a Democrat again? In this climate, probably not. Perhaps Joe should run for office since he's already being treated like a demon candidate. Tell me again, why anyone wants to run for office in this nervous breakdown of a country?

After all, left or right, we do politics in America like we are all brutes. There's a dangerous civil war out there folks, be careful.

Update: Joe the Plumber Racist?
Joe the Plumber About to Lose his Job?
Thank God we live in a free country, where you can speak your mind on public issues . .