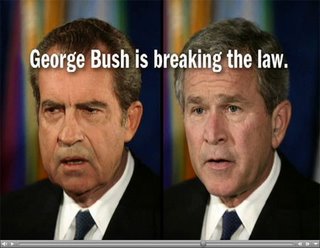 The nationwide ad - from Moveon.org - hits the airwaves Monday. It compares Bushie's Spying on America program to Watergate and calls for a special prosecutor to investigate the umlawful pResident.

"A massive ad buy on CNN is expected to give the spot special attention. The ad features former President Nixon saying, 'When the President does it, that means it's not illegal.'"

Then Tricky Dick morphs into Bushie.