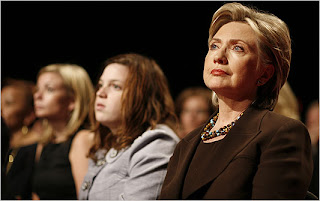 The most important aspect of the debate, in my view, was Obama's liberal insistence that it is high time that this country begin to invest in its people.

McCain put forth the usual conservative argument to the contrary, or it's every man, woman, and child for herself, as in Viva la Katrina!

Other than his ridiculous conspiracy theory suggestion that Obama belongs to some secret cell of (socialist) terrorists, I found viewing McCain on the split screen to be exceedingly annoying. And funny. Throughout the night, I was laughing out loud (and I was not alone!) at the parade of McCain's comical facial expressions. From grimaces to bulging eyes, raised eyebrows, smirks, disdain, and outright laughing while Obama talked, McCain's facial expressions were the highlight of the night. And not in a presidential way. He also kept looking at the moderator with a rude conspiratorial look that seemed to say, can you believe this guy?

And he couldn't sit still. McCain fidgeted throughout the entire debate; he needed to get up and pace but he couldn't, so he fidgeted. And what was it with the heavy breathing into the mic? And the blinking eyes? I could not take my eyes off his incessantly blinking eyes. Four more years of another uptight grumpy old impolite conservative man fidgeting in the White House would drive me crazy. Never mind that I need health insurance.

A Few of McCain's Facial Expressions
via Jed Report
Oh, Those Eyes
Blinkers lose elections: Science says: Eye Movements Matter. The rapid blinker during debates received fewer overall votes than his opponent. "In seven of these eight elections, the rapid blinker also lost the electoral vote and was defeated at the polls."

Alessandra Stanley at NY Times: They were seated, and this time, Mr. McCain made a point of looking at Mr. Obama, if often with a disdainful smirk and roll of the eyes. He kept taking out his pen to write on his yellow pad, almost as though it were a surrogate for reaching across and throttling the younger man he does not think should be challenging him because, as his aides put it, he hasn’t bled. . He smiled tightly when Mr. Obama spoke, perhaps under instruction from aides not to be grumpy as he attacked on multiple fronts. . Mr. Obama was calm, but also flat and dispassionate. He looked defensive, smiling and shaking his head as the fusillade of charges came at him.

Photo: Hillary at the debate via The Caucus, which live-blogged the final presidential debate.

"I think that the mood in the country, and the way voters are making their decisions points to a big victory for Democrats starting at the top of the ticket with Barack."
-- Hillary Clinton
Time: Undecideds Laughing At, Not With, McCain