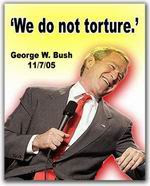 The conservative Washington Post endorses Barack Obama for President of the United States of America:

OF COURSE, Mr. Obama offers a great deal more than being not a Republican. . . We think he is the right man for a perilous moment.