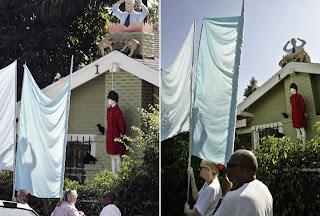 And the saga of the Sarah Palin effigy strung up with a hangman's noose continues.

In the photo here, protesters from the gay community make their disapproval known by attempting to block the effigy via sheets.

There are more photos and some comments from locals at the LAist. Check out the photo of the formerly quiet street now occupied by media trucks! The neighbors are undoubtedly annoyed.

Neighbors of the home owner who has mixed Halloween decor and free speech together for Sarah Palin effigy in his West Hollywood front hard took their First Amendment right this afternoon by peacefully covering the display with sheets for a half hour. 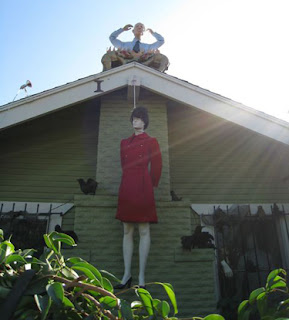 "Chad Michael Morrisette, a professional window display designer who set up the life-size mannequin of Palin in front of his house, said the protesters were mostly concerned that the Palin display cast a bad light on the city's gay community.

He said their demonstration lasted about an hour and a half," reported the LA Times. Morrisette told West Hollywood mayor Jeffrey Prang that the display will be down by 8:00 a.m. Saturday. 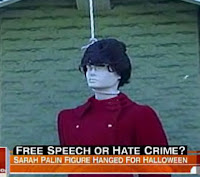