Shocking News! McCain Camp Accuses NBC of Being in the Tank for Obama! 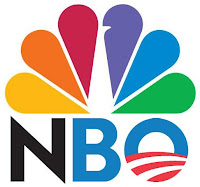 Shocking news! NBC may be biased for Obama! McCain's campaign manager Rick Davis has written a letter to NBC president Steve Capus asking for a meeting to discuss the evidence that NBC is "abandoning non-partisan coverage of the Presidential race."

After watching NBC/MSNBC journalists and debate moderators all but damn Hillary and orgasm over Barack during the Democratic primary, one has to wonder: where is the evidence that NBC has ever made a pretense of being non partisan?

Is there really anyone left who doesn't know that NBC is merely the mirror image of Fox News?

We are extremely disappointed to see that the level of objectivity at NBC News has fallen so low that reporters are now giving voice to unsubstantiated, partisan claims in order to undercut John McCain. Nowhere was this more evident than with NBC chief correspondent Andrea Mitchell's comments on "Meet the Press" this morning. . .

Andrea Mitchell is repeating, uncritically, a completely unsubstantiated Obama campaign claim that John McCain somehow cheated in last night's forum at Saddleback Church. . Indeed, instead of taking a critical journalistic approach to this spin, Andrea Mitchell did what has become a pattern for her of simply repeating Obama campaign talking points. .

We are concerned that your News Division is following MSNBC's lead in abandoning non-partisan coverage of the Presidential race. We would like to request a meeting with you as soon as possible to discuss our deep concerns about the news standards and level of objectivity at NBC.