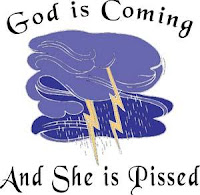 The wacko hatemonger who led the witch hunt against bloggers Melissa McEwan and Amanda Marcotte has begun a new hate campaign aimed at bloggers Bitch Ph.D and Towelrod.

Catholic League president Bill Donohue succeeded in getting McEwan and Marcotte removed from the Edwards staff by directing a campaign of hate mail and death threats at the women. Now Donohue wants to get a feminist blogger and a gay rights blogger barred from the Democratic National Convention.

“The list of credentialed blogs include radical sites like The Daily Kos. Worse are blogs that feature anti-Catholic and obscene material. The two most offensive are Bitch Ph.D. and Towleroad.

“On the home page of Bitch Ph.D. there is a picture of two children: one of them is shown flashing his middle finger. Today’s lead post, which was written August 17, is called ‘Jesus Christ.’ It begins with, ‘I’m a really crappy Catholic who hasn’t been to mass in ages because most parishes around here ‘will’ insist on being aggressively anti-abortion….’ The writer then objects to some children’s toys on the grounds that they are more offensive than desecrating the Eucharist. The toys are actually balloons that have been made to depict Jesus in various poses, including a crucified Christ; one of these images shows Jesus with a penis. Several who commented on this image made patently obscene comments.

“Towleroad describes itself as ‘A Site with Homosexual Tendencies.’ Accordingly, it shows men in jock straps and underwear. It also has a post on Pope Benedict XVI that takes him to task for wearing a cape with ermine. Some of those who commented on this described the pope in a vile and profane way. [via]

People for the American Way: Bill Donohue: Keeping the Internets Safe Since 2007