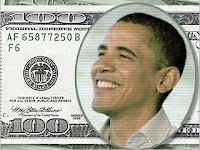 Quote of the Day

"The McCain campaign has obviously been watching our primary very closely and recognized how damaging it had been to be tagged with the charge of race baiting."
-- Howard Wolfson,
cited in New York Times
Recalling the primary days when the Obama campaign and surrogates smeared Hillary and Bill Clinton (and the Democratic voters in a few states) as racists or race baiters, Wolfson was responding to the ongoing ludicrous race card drama between Obama and McCain. Howard Wolfson was communications director for Hillary Rodham Clinton's campaign.

John McCain has pushed back against Obama's suggestion that as a Republican McCain is naturally a racist who can be counted on to try to frighten voters by pointing out that Obama is Black or "doesn’t look like all those other presidents on the dollar bills.”

The Obama camp "initially denied the remark was a reference to Obama's race," but the campaign has since admitted it. In yet another chapter of the politics of strange bedfellows, the McCain campaign points out that it was "deeply unfair to suggest" that Bill Clinton's criticism of Obama had anything to do with race. [via]

See the discussion at TalkLeft