Feminist Trailblazer Hillary Rodham Clinton: Women Are the Core of the Democratic Party 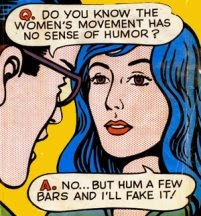 "Do you know how difficult it is for women to stand up and say we are the best at anything? The Democratic Party has to know that women are the core, women have to be at the table and women are going to be heard as we continue in these contests until they finally end."
-- Hillary Rodham Clinton
She was speaking to a gathering of 1,500 at the "Generations of Women for Hillary" fundraiser at the Omni Shoreham Hotel in Washington. The women gave her "a thunderous and extended standing ovation." And why not? She is the women's candidate. She represents us. She is opening doors for us. In the short span of her historic presidential campaign, Hillary Rodham Clinton has taken a lifetime of venomous misogyny and she has taken it for all of us. If she has not reawakened the long dormant feminist movement, no one can. If she wins, we win. If she loses, we lose:

And it's not so much about my comeback it is about our comeback.

Meanwhile, it's just another ordinary day in the presidential campaign of feminist trailblazer Hillary Rodham Clinton. The Obama News Network is again awash with calls for Hillary to drop out.

But the woman says, "You can turn elections in a day."

And at Shepard University, more of what we have come to expect from Obama supporters. A large, loud and rude contingent of Obama supporters showed up at Hillary's first campaign event in West Virginia:

Mrs. Clinton endured boos when she mentioned her proposal for a gasoline tax holiday, catcalls when she spoke of ending the Iraq war and, most difficult of all, the heckling of her daughter, Chelsea, who introduced her.

“End the dynasty!” a young man holding an Obama poster shouted when Chelsea Clinton stepped to the microphone.

Women Will Not Forget:

Riverdaughter: An Invitation to Democrats in Exile

Violet Socks: Why I will not vote for Obama even if he’s the nominee — and why you shouldn’t either

Women & Politics: Gender Matters - A Lot!
“Too many people have fought too hard to see a woman in this race."
-- Hillary Rodham Clinton

Update: Taylor Marsh was at the fundraiser!