Still No Debate, But Obama & McCain to Pander Together in Mega Church 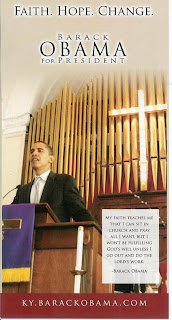 The battle for the votes of evangelicals will take McCain and Obama to the mega Saddleback Church, in Lake Forest, Calif., shortly before the Democratic Convention. Obama continues to turn down McCain's invitation to debate in town-hall style forums, but the Democratic presumptive nominee has agreed to appear with McCain in a forum on the stage of a mega church.

Who needs a debate when you can pick up votes by pandering to evangelicals in their very own church? This is one of the reasons I've never supported Republicans. In the pre-Obama days, I had lots of progressive company in the disdain for mixing religion with politics. But as we saw during the primary, little things like First Amendment issues go flying out the door once you've drunk the Obama kool-aid.

And this was supposed to be a good year for Democrats:

It has taken a man of God, perhaps, to do what nobody else has been able to do since the general election season began: Get Barack Obama and John McCain together on the same stage before their party conventions later this summer.

The Rev. Rick Warren has persuaded the candidates to attend a forum at his Saddleback Church, in Lake Forest, Calif., on Aug. 16. In an interview, Mr. Warren said over the weekend that the presidential candidates would appear together for a moment but that he would interview them in succession at his mega church. . . The forum still falls short of the kind of face-to-face, town-hall-style debates that Mr. McCain, of Arizona, has called for this summer before formal debates scheduled for this fall.

The Pew Forum on Religion & Public Life finds that Obama does not have as much support from evangelicals as John Kerry had at this time four years ago. [via]