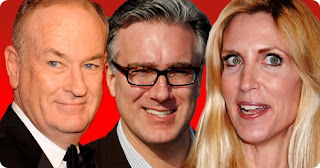 Radar Online has a list of the five most obnoxious and intensely hated cable news pundits. No one here will be surprised to hear that Keith Obamaman leads the despicable pack. Back in May, Keith came in as the number one Hillary hating pundit in a TGW poll.

The list doesn't come from viewers, rather it is from the unfortunate folks who actually know the pundits. Sad to say, Keith continues to have many lefty fans who take his every lying word for the gospel, as those of us who witnessed the devolution of the netroots during that misogyny-fest of a Democratic primary know all too well.

HEAD TRAUMA: In a recent profile of Olbermann in the New Yorker, Peter Boyle recalls that he could be so "overbearing" that Suzy Kolber, a former colleague of his at ESPN, would sometimes "lock herself in the bathroom and cry." It's a sentiment that people who know him today echo. "I love his politics, and think he's really filled a void for the left that was missing on TV, but the guy is just a total asshole," says a former colleague of the frequent Page Six target.

"He's just a full-blown, red-in-the-face screamer." Another former MSNBC staffer notes that Olbermann refused to communicate with underlings face to face when he worked out of the network's Secaucus operation, instead insisting that anyone who wished to get in touch with him leave him a note in a special mailbox. "His disregard for those beneath him is almost comical," the staffer continues. "I remember he had an assistant back then named Brian whom he made go out and buy presents for other people. Brian did, with his own money, and of course Keith never reimbursed him." Says an NBC producer who has worked with him: "He is, to put it kindly, brusque." [via ]