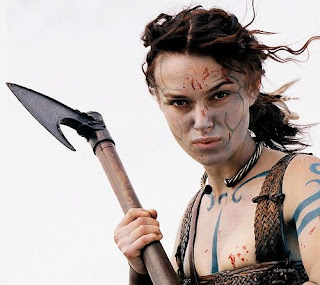 Just like every year except 1984, the list of serious contenders for the Democratic VP spot appears to be another boring list of people with penises. Never mind that Hillary Rodham Clinton is apparently not on the list, even though a number of 'progressives' are certain she has one.

The latest excuse for preserving this nation's tradition of male rule is that any woman other than Hillary would surely cause a backlash among women voters.

That's right. Women are asking for it:

From the Times: If he does not choose Mrs. Clinton, several Democrats said, it would be difficult for him to name any woman -- like Gov. Kathleen Sebelius of Kansas, someone for whom he has had warm words. Both Clinton and Obama advisers said such a move could create a backlash among women who supported Mrs. Clinton.

Um, except the backlash among Hillary supporters has already arrived.

And then there is the inconvenient fact that yet another boringly all male ticket risks causing its own furious backlash.

Adele Stan weighs in on the absurd notion that Obama will choose a man because women are simply demanding it:

Let's say I'm a woman over 50 who's totally jazzed by the notion of someone who looks like me, who's had to eat a lot of the same crap I've had to take, becoming the President of the United States. Then this young guy, just like that self-important jerk I trained in his junior exec years, sweeps right by her, just like the jerk swept by me, to become CEO. I'm mighty pissed, and I may not vote for you. So don't you dare put someone on the ticket, other than my choice candidate, who looks like me and has had to eat a lot of the same crap that I've had to take... Sorry. Does not compute.