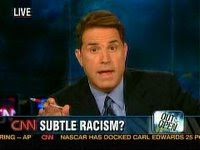 Well, the media has gone into one of its stark raving mad fits again. On days like this, I'm almost grateful that Hillary Clinton is out of the line of their deranged fire. My tolerance level for insanity is low today, so let's see if I can succinctly summarize the insanity.

Wes Clark observed on Face the Nation yesterday that being a prisoner of war and/or serving in the military is Not a qualification for the presidency:


“Well, I don’t think riding in a fighter plane and getting shot down is a qualification to be president. . Because in the matters of national security policymaking, it's a matter of understanding risk. It's a matter of gauging your opponents and it's a matter of being held accountable. John McCain's never done any of that in his official positions. I certainly honor his service … But he hasn't held executive responsibility."

Shocker, eh? In case you didn't fully understand the level of treason [snark] embedded in the remarks of General Wes Clark, CNN's Rick Sanchez interprets it for you:

Rick Sanchez's lead-in to his next segment . . on CNN:

I’m liveblogging. He goes on to say:

"It will reverberate for weeks. Wes Clark tried to diss McCain's military record, that his service doesn't qualify him to be president."

That's right, Sanchez said Wes Clark "swiftboated" John McCain because the new definition of swiftboat is "to criticize. . . to point out facts." And just like when Obama took the media's word as "truth" in countless lies and mistruths about Hillary and Bill Clinton - Obama, once again, agrees with the irresponsible madness we call media.

"As he's said many times before, Senator Obama honors and respects Senator McCain's service, and of course he rejects yesterday's statement by General Clark."

As if that wasn't clear enough, Obama personally rebuffed Wes Clark in his very long speech about patriotism earlier today. Exactly whose side is Obama on? Gawd. It's going to be a very very long general election. As always, my take on this is simple: The Empire is effin' imploding!