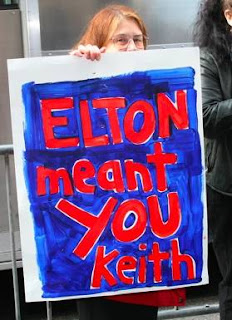 The punishment for objecting to the cultural normalcy called misogyny is swift and vicious. If you doubt it, just ask a Hillary blogger.

After Katie Couric said this --

Like her or not, one of the great lessons of Hillary Clinton's campaign is the continued—and accepted—sexism in American life...particularly in the media.

"It is sad that Ms. Couric could not have emulated [Cowan] and separated the hype from the news in her own promulgation of the nonsense that Senator Clinton was a victim of pronounced sexism," bloviated MSNBC's biggest and most inflated woman-hating fool.

How fitting that Katie Couric received an award from a misogynist right after receiving the feminist "Alice Award" -- named after feminist icon Alice Paul. If Paul were alive today, she too would be on the receiving end the venom from Keith and his army of "progressives."

Keith Olbermann is the same creep who named Elton John "Worst Person" for the crime of naming the problem -- "misogyny".

What is "sad" is that throughout the historic campaign of the first woman to ever have a chance in hell of achieving the highest position of power in this woman-hating cowboy country, Keith provided "progressives" with a steady stream of the vilest and most vicious of lies and woman-hating talking points.

Keith, Chris, and the rest of the MSNBC crew broadcast the ridicule and jeers and lies and slurs into our homes and the army of online "progressives" spread the misogynistic garbage onto the "progressive" blogs and into the comment sections and inboxes of virtually every Hillary blogger on the world-wide web.

Keith Olbermann is the same misogynistic creep who suggested that the way to persuade Hillary to quit the race would be for a man to beat her senseless, or "take her into a room and only he comes out."

Olbermann [countdown@msnbc.com]: Couric Worst Person
Countdown Transcript: And our winner, Katie Couric. Speaking at a Washington luncheon in her honor, the CBS anchor saying, "However you feel about politics," or her politics, rather, "I feel that Senator Clinton received some of the most unfair hostile coverage I`ve ever seen." She added that sexism "contributed in part to the Senator's defeat."

A little Kool-Aid-ish, but her opinion and she`s entitled to it. What followed she was not entitled to. Couric referred to one, quote, "prominent member of the commentariat" who had said he found it hard to be objective when it came to Obama. "That's your job," she says. Then she suggested he "find another line of work."

She didn't name him, maybe because she didn't bother to look it up. But the supposed member of the "commentariat" who said that was not, in fact, a commentator. It was NBC News correspondent Lee Cowan, who covered the Obama campaign throughout the primaries, and who, as Ms. Couric would have found out had she bothered to examine the context of his remark, was speaking with refreshing honesty, acknowledging that the environment of that campaign and the ferocity of the candidate`s supporters in the primaries challenged a reporter to be especially professional and vigilant in separating the hype from the news.

I probably saw literally 90 percent of Lee Cowan`s reporting in this campaign, and it was utterly objective and accurate. It is sad that Ms. Couric could not have emulated him and separated the hype from the news in her own promulgation of the nonsense that Senator Clinton was a victim of pronounced sexism. And as to her advice that a reporter like Lee Cowan, who was her colleague at CBS for nearly a year, should find another line of work, it is sadly obvious that in leaving NBC and the Today Show, Ms. Couric already has. Katie Couric, today's "Worst Person in the World." via


Receiving an award named after feminist icon Alice Paul yesterday, CBS Evening News anchor Katie Couric said . . "however you feel about her politics, I feel that Sen. Clinton received some of the most unfair, hostile coverage I've ever seen" -- rooted in sexism, she charged, helping to lead to her defeat. (For more about Alice Paul, see Iron-Jawed Angels.)

Katie Couric: Hostile & Sexist Campaign Coverage
I watched the most recent interviews of Hillary Rodham Clinton by Bill O'Reilly and Keith Olbermann, and I concluded that of the two men, the only one fit to be invited into my home is the right-wing man.