Indiana/NC Primary Drama: Brazile and Begala Slug It Out On CNN (Video) 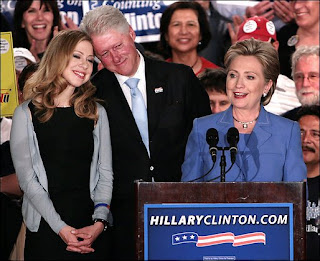 And the Democratic primary continues. After a rough night with North Carolina going to Obama and Indiana just squeaking into Hillary's column, I know I'm not the only one who is feeling down. Expect the Obamabots to call for Hillary to drop out -- just like they do when she wins.

But the West Virginia primary is next Tuesday. Hillary vows to fight on, and at this very moment, the woman is speaking in West Virginia.

It was all the boys at the Obama News Network could do to stay in their seats last night. Olbermann, Matthews and Russert were gloating, grinning and itching to do a little malicious victory dance. At one point, Keith snarked that he didn't know why Hillary should even bother to speak last night. At that point, I turned over to the fair and balanced Fox.

But the real drama was at CNN where Campbell Brown actually challenged Donna Brazile's sham of a "neutral" position. The whole world knows that Donna is an Obambot, yet the Democratic Party leader continues the sham of appearing on CNN as a neutral commentator. With leadership like Brazile's, little wonder the Democratic Party appears to be "cracking up." At one point Brazile seemed to suggest that the new Democratic Party of Blacks and elite liberals (eggheads and African-Americans) doesn't really need working class and Hispanic voters.

No mention of us invisible women for Hillary. We are almost as invisible in the media coverage as we are voiceless on the cable news pundit panels.

Paul Begala argued that Donna was saying the Obama coalition of eggheads and African-Americans can make it just fine all by themselves. Brazile defended The Precious, and the Democratic Party leadership slugged it out, all on the video below.

BRAZILE: Well, Lou, I have worked on a lot of Democratic campaigns, and I respect Paul. But, Paul, you're looking at the old coalition. A new Democratic coalition is younger. It is more urban, as well as suburban, and we don't have to just rely on white blue-collar voters and Hispanics. We need to look at the Democratic Party, expand the party, expand the base and not throw out the baby with the bathwater.

Update: I should have noted that Paul Begala is one of the Hillary supporters who was suspended from his duty as CNN commentator until after the Democratic Primary is resolved. After repeated complaints from the Obama campaign, Hillary supporters Paul Begala, James Carville and Robert Zimmerman were kicked off the CNN commentator panel. But we still have the likes of Donna Brazile because CNN is fair and balanced. Imagine if CNN & MSNBC kicked off all the Obama supporters!! God, I hate the Obama News Network.