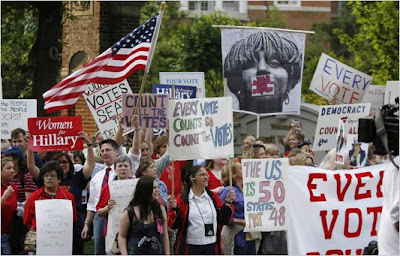 Women protesters rally in D.C. to demand that the DNC count every vote! And the DNC meeting continues. . . one of the more riveting questions raised this morning: How to fairly punish Florida Democrats/voters for the Republicans' crime of moving up the Florida primary date?

Punishing Democrats for the deeds of Republicans. Wow.

Democrats were hashing it out until 2 am last night. Katharine Seelye at The Caucus has the great photo above of the ongoing demonstration outside the DNC meeting. And she has this telling quote from Allan Katz, "chief advocate" for the unity candidate: 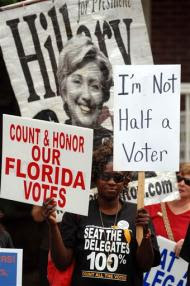 "There’s a strong push from the Clinton campaign to try and make believe that those primaries were real primaries, that everyone competed in them like they did in everything else. And there’s a strong push back from the Obama campaigns that, well, the rules were that this is not how we were going to select the delegates."

Yeah, because all those dumb voters in Michigan and Florida actually thought they cast "real" votes.


"There have been very tough disagreements and ugly moments. Emotions have run very high. There have been blatantly sexist comments, particularly by some members of the media. And blatantly racist remarks. And we know that those comments have no place in our society."
-- Howard Dean