NY Times: Several people inside the room arrived with tape over their mouths, a sign of their contention that they were being silenced in the current Democratic presidential primary. . . A woman paced back and forth along the sidewalk, holding a sign that declared, “Count our votes or don’t count on us in November!” 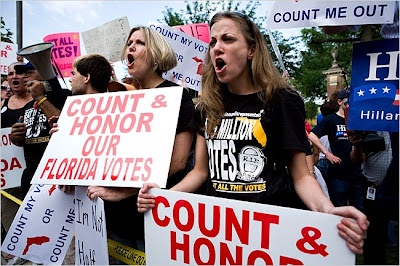 Angry protesters, and they are overwhelmingly women, make the radical demand that every vote be counted! Isn't that just like a woman? -- Photo via New York Times