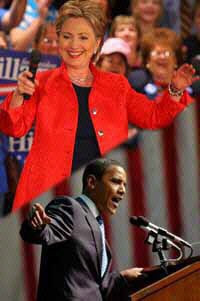 PA Exit Polls: Only 50% of Hillary Supporters Will Vote for Obama If he's the Nominee

Exit polls just confirmed what women on this blog and all over the net have been saying. Women are fed up. Only fifty percent of Hillary supporters say they will vote for Obama if he gets the nod -- according to Pennsylvania exit polls, via CNN. Nearly six in ten Pennsylvania voters are women!

This comes as a surprise to the clueless media because the male pundits are Not in the habit of listening to women. Many of them prefer to leer. As the women of America are painfully aware, women are represented in the media as pathetically as we are represented in Congress.

Sixty-seven percent of Obama supporters say they will vote for Hillary.

"I am confident I will get her votes if I'm the nominee. It's not clear she would get the votes I got if she were the nominee."
-- Barack Obama
They're reporting 'extremely heavy' voting going on in Pennsylvania. The Democratic primary of 2004 saw a 26% turnout.

Today's turnout is predicted to be double that or to more closely rival the turnout in November 2004 (73%).

From CNN to MSNBC, the coverage is already pathetic. They really hate it when she wins.

CBS reports: 'Obama reported spending $11.2 million on television in the state, compared with $4.8 million for Clinton. (See the latest campaign finance reports.)' Wow. Those are some expensive votes.