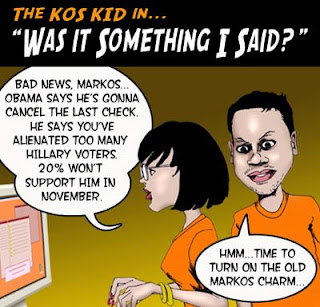 And you thought Drudge was bad. The crazed Obamazombies, who continue to call themselves progressive (instead of deranged), over at ObamaFlash have an OBAMAFLASH NEWS ALERT for you.

Did you know that Hillary Rodham Clinton is behind the Jeremiah Wright scandal? Cause when you reside in Obama-la-la-land, all your woes are the fault of Hillary.

ObamaBlog has it: Speculation grows that Hillary was behind Rev. Wright's loony Press Club appearance

Obama Underground has the ObamaFlash story at the top of their homepage.

A gawdzillion bloggers have it. Of course, some of them are conservative and some of them are progressive (sic) bloggers, but who can tell the difference? They all tell the story the exact same way. Thousands of words written about Hillary's latest evil conspiracy.

What evil thing will Hillary do next? One thing is certain. With all the power wielded by Hillary Rodham Clinton, Obama is so losing this primary!!!