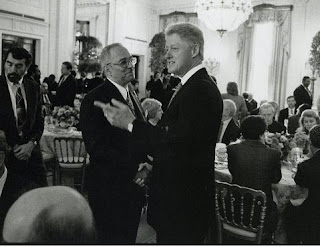 Obviously, I want Hillary Rodham Clinton to be the next president of the United States. But I'm a liberal, and so under no circumstances do I want race to have anything to do with Hillary's win. When I first saw this photo of Bill Clinton and Rev. Wright (Al Gore is there too), I thought oh great, right-wingers are trying to make the argument that all Democrats are 'no good America-hating anti-white racists.' I thought I'd show a little lefty solidarity and post the photo with the tongue-in-cheek headline: We're All Anti-American, Anti-White Racists Now.

But it wasn't right-wingers who delivered this photo of Bill Clinton and Rev. Jeremiah Wright to the media. It was Obama's staff. In yet another example of how Obama will do anything to win, this little stunt is clearly an effort to divert the media on to Hillary with the hope that the photo will dredge up the whole Monica Lewinsky affair. Shame on Obama. Ordinarily, Hillary and Bill would be defending Obama from the ongoing 'Pastor Wright is a monster' media frenzy, but since the Clintons have been maligned by the Obama camp as racist, there's not exactly any reason to bother.

In providing the photograph to The New York Times, the Obama campaign appeared to be trying to divert some attention to the Clintons after a week in which Mr. Obama’s relationship with Mr. Wright has left him facing one of the biggest challenges of his campaign. There is nothing in the picture or the note that addresses whether Mr. Clinton had met Mr. Wright prior to the White House meeting or whether he or Mrs. Clinton knew anything about Mr. Wright’s views. . .

During one of the most difficult periods in the presidency of Bill Clinton, he addressed a group of clerics at an annual prayer breakfast in September 1998 just as the Starr report outlining his dalliance with Monica Lewinsky was about to be published. Among those in attendance, was the Rev. Jeremiah Wright Jr., who is seen shaking hands with Mr. Clinton. Asked for a response tonight through email, Howard Wolfson, a top aide to Senator Hillary Rodham Clinton, wrote, “Urgent indeed — a picture — oooooooo!”

Senator Clinton’s spokesman, Phil Singer, sent along this reply to a request for comment: In the course of his two terms in office, Bill Clinton met with, corresponded with and took pictures with literally tens of thousands of people.