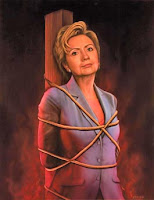 Is anyone besides me watching the CNN and MSNBC Obama worshipers? For days the Hillary-hating pundits have been discussing the Clinton campaign. They wonder what on earth is wrong with it! They can't figure out why there's nothing but smooth sailing for Obama and nothing but grief and pain for Hillary!

Do these idiots ever look in the mirror? Don't they ever watch themselves singing praises to Obama 24/7 and slinging ridicule and hate at Hillary? Do they really think they don't shape public opinion? This lunatic country doesn't deserve anyone as smart and classy as Hillary Rodham Clinton.

Erica Jong: Let me tell you about the Hillary-Haters who fill my inbox, they can't spell. They also believe in witchcraft. They believe HRC boils eye of newt with unborn baby's hair and little Jewish children not yet circumcised. They think she had a child with Vince Foster (even though Chelsea looks much like Bill and even his mother), then murdered him. They think she will leave Iraq, not leave Iraq, give us universal health care, not give us universal health care, sanction the killing of fetuses, not sanction the killing of fetuses, defend Israel, not defend Israel, end the Death Tax, not end the Death tax.

She's a Witch!
Remember Geraldine Ferraro -- tarred with the brush of her Italian-American husband, whom they claimed was a mafioso? Remember Bella Abzug, attacked for her hats (which covered too large a brain)? Remember Eleanor Roosevelt, attacked for her teeth? Remember Victoria Woodhull (the first woman to run for president) "hanged" as a whore? Remember Emma Goldman rode out of town on a rail -- for being Jewish, liking to dance and supporting the rights of the working classes?

I give up. If I have to watch another great American woman thrown in the dustbin of history to please the patriarchy, I'll move to Canada -- where they live four years longer than we because they have universal health care. -- Patriarchy:1000, Hillary:0

WaPo: Pennsylvania Gov. Ed Rendell (D) said Monday that the media's pro-Obama (or anti-Clinton) bias explains in part why Barack Obama is portrayed as running away with the Democratic presidential nomination (instead of being locked in a close fight with Hillary Rodham Clinton). Rendell insisted that the "media has relished this fall with glee that I have never seen in any other candidate in the thirty years I have been in the business." But there does seem to be an emerging sense that the media's perceived laudatory coverage of Obama has seeped into the general consciousness of the country; Saturday Night Live poked fun at it over the weekend, so maybe there is something to the Clinton campaign's argument.