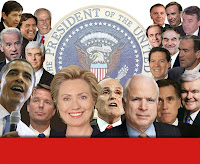 Nashville: Sen. Hillary Clinton congratulated Sen. Barack Obama on his primary win in South Carolina, and observed that the campaign has only just begun. She said now 'the eyes of the country turn to Tennessee' and toward Tsunami Tuesday. [Transcript]

Speaking at Nashville's Historically Black Tennessee State University (TSU), Hillary Clinton promised to "push for universal health care, affordable college education, universal pre-kindergarten, a fairer tax code, restored respect for America in the world and an end to the Iraq war." Senator Clinton is in Memphis this morning and "will appear on CBS's Face the Nation from Memphis before attending services at Monumental Baptist Church."

Hillary Clinton at Tennessee State University
Hillary has a very large lead in most of the Tsunami Tuesday races (polls) -- and that includes Tennessee. [More state polls] The question is whether Obama's South Carolina win can change voters' preferences across the nation. Exit Polls here.

Marc Ambinder notes: "South Carolina and Iowa were the two retail states where Obama's campaign worked the hardest and spent the most, and Obama was able to build movements in those states. But it took months. He can't replicate these organizations in 22 states in 9 days. . Hillary Clinton is running strong in states like Tennessee, Missouri and Arkansas -- all interior states -- and is stronger in the states with the most delegates. . Including Florida and Michigan, more Democrats have voted for HRC than any other candidate by far."