The Hillary Tip Nonscandal - Waitress to Media: 'You People Are Nuts' 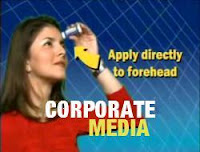 I guess you saw the media run amok again yesterday in hopes of provoking what the New York Times called a "potentially embarrassing mini scandal." After NPR, Drudge, NBC, ABC, et al rushed to broadcast to the world that Hillary's campaign forgot to leave a tip at a restaurant in Iowa, the story soon proved to be false.

But the best part of the story about our insane 'gotcha' media is what waitress Anita Esterday said to reporters when they called her at her home in Iowa:

“You people are really nuts,” she told a reporter during a phone interview. “There’s kids dying in the war, the price of oil right now — there’s better things in this world to be thinking about than who served Hillary Clinton at Maid-Rite and who got a tip and who didn’t get a tip.”

Someone give this woman a job at the New York Times.

Yesterday, the Clinton campaign set up a site to rebut the lies and misinformation. Already, they have a page full: The Fact Hub.

"It is simply no longer possible to ignore the strangeness of our public discourse." -- Al Gore