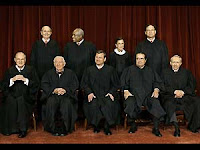 Just like in the 19th century, the elderly Fathers make our choices for us. In other words, the Fathers on the High Court term women as always mothers and wives, but they treat us as their daughters.

Some of Kennedy's rhetoric reeks so much of paternalism that it reads like the rulings of the Fathers on the 19th century courts.

"The paramount destiny and mission of women are to fulfill the noble and benign office of wife and mother. This is the law of the Creator." Bradwell v. State of Illinois, 1872 [83 U.S. 130 at 141]

In Kennedy's opinion, women are once again mothers and wives first -- and flighty ones at that -- not autonomous individuals with the right to choose our fate.

Women mothers can't make their own decisions because we change our minds too much, and we're just not smart enough to make informed decisions, opines Father Kennedy.

"It is self-evident that a mother who comes to regret her choice to abort must struggle with grief more anguished and sorrow more profound when she learns, only after the event, what she once did not know . . . ", Gonzales v. Carhart

Like every good "pro-lifer," Kennedy views all women, especially pregnant women, as mothers. The man even views women who have terminated their pregnancies as mothers!

Have you had your period this month, ladies? No? Well, congratulations, you may be a mother!

It will be up to the 2009 Democratic Congress to undo this judicial slap in the face to women's rights.

An editorial in today's New York Times weighs in on the High Court's view of women as "flighty creatures," as well as the ever diminishing credibility of Bushie's Loyal Supreme Court:

"Justice Kennedy actually reasoned that banning the procedure was good for women in that it would protect them from a procedure they might not fully understand in advance and would probably come to regret. This way of thinking, that women are flighty creatures who must be protected by men, reflects notions of a woman’s place in the family and under the Constitution that have long been discredited, said a powerful dissenting opinion by Justice Ruth Bader Ginsburg, joined by Justices John Paul Stevens, David Souter and Stephen Breyer."

". . . The court has handed the Bush administration and other opponents of women’s reproductive rights the big political victory they were hoping to get from the conservative judges Mr. Bush has added to the bench. It comes at a real cost to the court’s credibility, its integrity and the rule of law."