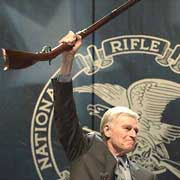 A Volatile Young Man, Humiliation and a Gun
By BOB HERBERT

“God I can’t wait till I can kill you people.”
— A message on the Web site of the Columbine killer Eric Harris.

In the predawn hours of Monday, Aug. 1, 1966, Charles Whitman, a former marine and Eagle Scout in Austin, Tex., stabbed his wife to death in their bed. The night before he had driven to his mother’s apartment in another part of town and killed her.

Later that Monday morning, Whitman gathered together food, water, a supply of ammunition, two rifles, a couple of pistols, a carbine and a shotgun and climbed the landmark 30-story tower on the campus of the University of Texas.