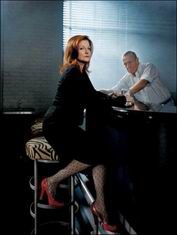 Maureen Dowd's Mission: Bringing Down all the Democrats

MoDo's latest blistering hit piece on Barack Obama and Hillary Clinton has caused a ruckus. The attack column was featured on the Drudge Report, and it portrays a remarkably different, or inferior, Obama at a campaign event than do actual news stories such as this one.

Among her many slights, the "Queen of Mean" calls Barack Obama: Obambi.

Dowd's column features former Bill Clinton supporter David Geffen taking pot shots at the Clintons. According to Geffen, "Everybody in politics lies," but the Clintons do it with "ease."

Eric Boehlert over at Media Matters dissects the attack column and observes that Dowd's nasty gossip columns about Democratic candidates have in the past "been embraced by the mainstream press and tripped up Democrats such as Hillary Rodham Clinton, Al Gore, and John Kerry."

Kos has an excellent summary (and gets attacked in the comments for being sexist):

"She was no different when she started the narrative of Gore being boring, or Kerry being elitist, or Hillary raking in illegal gifts. Have any of us forgotten her oft-quoted story in 2004 accusing Kerry of saying, at a NASCAR rally, ""Who among us doesn't like NASCAR?" It was a complete fabrication. Tapes of the event proved Kerry never said such a thing. Not that Dowd cared."

"So it's no surprise that it's Obama's turn."

And people are talking about Dowd's earlier hit piece on Obama.

Way to go, Maureen! Support the insanely incompetent Republicans by attacking Democrats, and make that war last forever by bringing down all the Dems! Sheesh!

via Cursor and memeorandum