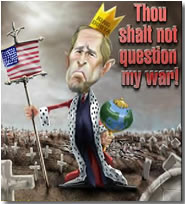 The Basics in Iraq
By MAUREEN DOWD

WASHINGTON: The only sects that may be more savage than Shiites and Sunnis are the Democratic feminist lawmakers representing Northern and Southern California.

After Nancy Pelosi and Jane Harman had their final catfight about who would lead the House Intelligence Committee, aptly enough at the Four Seasons’ hair salon in Georgetown, the new speaker passed over the knowledgeable and camera-eager Ms. Harman and mystifyingly gave the consequential job to Silvestre Reyes of Texas.

Mr. Reyes promptly tripped over the most critical theme in the field of intelligence. Jeff Stein, interviewing the incoming chairman for Congressional Quarterly, asked him whether Al Qaeda was Sunni or Shiite.

As Mr. Stein corrected him in the article: “Al Qaeda is profoundly Sunni. If a Shiite showed up at an Al Qaeda clubhouse, they’d slice off his head and use it for a soccer ball.”

Mr. Stein followed up with a Hezbollah question: “What are they?” Again, Mr. Reyes was stumped.

“Hezbollah,” he stammered. “Uh, Hezbollah. Why do you ask me these questions at 5 o’clock? Can I answer in Spanish?” (O.K. ¿Que es Hezbollah?)

Sounding as naked of essentials as Britney Spears, the new intelligence oversight chief pleaded that it was hard to keep all the categories straight. Thank heavens Mr. Stein never got to Syrian Alawites.

Many Americans, including those in charge of Middle East policy, are befuddled and fed up with the intransigent tribal and religious fevers of the region. As Bill O’Reilly sagely remarked, “I don’t want to ever hear Shia and Sunni again.” But it is beyond the job description of top officials to wish the problems away, especially when the entire region is decomposing before our bleary eyes.

If Mr. Reyes had been reading the newspaper, he might have noticed Mr. Stein’s piece on The Times’s Op-Ed page two months earlier, in which, like a wonkish Ali G, he caught many intelligence and law enforcement officials, as well as members of Congress, who did not know the difference between a Sunni and a Shiite.

“Too many officials in charge of the war on terrorism just don’t care to learn much, if anything, about the enemy we’re fighting,” he concluded. “And that’s enough to keep anybody up at night.”

The lack of intellectual urgency about our Middle East wars is chilling. The Iraq Study Group reported that our efforts in Iraq are handicapped by the fact that our embassy of 1,000 has only 33 Arabic speakers, just six who are fluent.

W., of course, failed a foreign affairs pop quiz and still became a close ally of the Pakistani dictator he referred to as “General … General.”

Once they have the job, the incentive of politicians to study is somewhat dulled. Charles Z. Wick, who headed the U.S. Information Agency during the Reagan years, sent a memo to his staff saying that he and the president needed to know if France was a member of NATO. Mr. Reagan had already been the president for years, The Times’s Steve Weisman reported, when he expressed surprise at learning that the Soviets had most of their nuclear weapons on land-based missiles, while America had relatively few.

One possibility is that Mr. Stein’s questions were just too darn hard. He should have pitched a few warm-ups, like: How many sides are there in the Sunni Triangle? Or: Which religious figure, Muhammad or Jesus, has not been the subject of a Mel Gibson film?

Perhaps the questions could be phrased Jeopardy-style, as in: “The name shared by two kings in Jordan and Saudi Arabia.” (What is Abdullah?)

A multiple choice might be easier on harried policy makers. For instance, which of the following quotes can be attributed to Dick Cheney?

a) “So long as the Arabs fight tribe against tribe, so long will they be a little people, a silly people: greedy, barbarous and cruel.”

b) “Don Rumsfeld is the finest secretary of defense this nation has ever had.”

c) “Certain things are not known to those who eat with forks.”

Or this: Is the Shiite crescent a) a puffy dinner roll, b) a new Ramadan moon, or c) an arc of crisis?

Once our leaders get a grasp of the basics, we can hit them with a truly hard question: Three and a half years after the invasion of Iraq, with nearly 3,000 American troops dead and the Iraqis not remotely interested in order or democracy, what on earth do we do now?