Don't Take Your Kids to Georgia 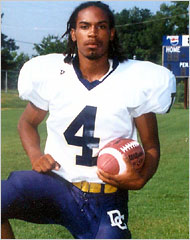 Today's New York Times has a story about the kid I wrote about yesterday. Before he was thrown into prison for the crime of "having consensual oral sex with a 15-year-old girl at a New Year’s Eve party," Genarlow Wilson was "a football player, honor student and the first homecoming king at Douglas County High School."

According to Genarlow Wilson's attorney, if the crime had been "intercourse with this girl, had he gotten her pregnant, he could only have been charged with a misdemeanor and punished up to 12 months."

Again, what kind of country gives a 17 year old kid ten years without parole for the crime of having consensual sex with another kid?

The prosecutor, David McDade, the district attorney in Douglas County, west of Atlanta, says he has repeatedly offered Mr. Wilson the opportunity to resolve the case with a plea deal, adding that he would have to be treated similarly to the other defendants in the case, who are serving prison sentences of five to seven years with a chance at parole. They, too, will have to register as sex offenders.

Mr. Wilson is adamant that he will not plead.

“Even after serving time in prison, I would have to register as a sex offender wherever I lived and if I applied for a job for the rest of my life, all for participating in a consensual sex act with a girl just two years younger than me,” he told a reporter for Atlanta magazine last year, adding that he would not even be able to move back in with his mother because he has an 8-year-old sister. “It’s a lifelong sentence in itself. I am not a child molester.”

Genarlow Wilson, 20, has been in prison for nearly two years.

Update: The contact web form for the Governor of the insane and barbaric third world state of Georgia is down. Gee, how convenient. But you can call and/or fax him:

Hey Governor Perdue, can I help you secede from the Union?