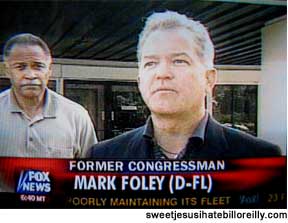 Instead of "Mark Foley (R-FL)," the disgraced child predator was pictured with "Mark Foley (D-FL)" under his name.

If only the Bush Fan Club that calls itself Fox News had any credibilty, this lie would surely destroy it. Since it has none, Faux News will instead reap an even greater and an even more deserved reputation as the most disreputable and dishonest network in the country.

More screenshots at Bradblog and the b side.

Newshounds and Huffington Post and dkos also have the story.