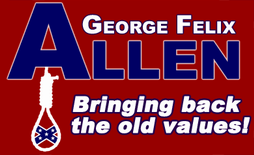 Let's face it folks, it appears that being a bigot is a qualification for belonging to the Republican Party.

Blacks, gays, jews, women, poor people, immigrants .... exactly who on this friggin' planet does the Republican Party like?

Michael Scherer at Salon has an explosive piece about the extent of Senator George "Macaca" Allen's bigotted past.

And it reads just like a narrative from the Jim Crow era.

"Allen said he came to Virginia because he wanted to play football in a place where 'blacks knew their place,'" said Dr. Ken Shelton, a white radiologist in North Carolina who played tight end for the University of Virginia football team when Allen was quarterback. "He used the N-word on a regular basis back then."

A second white teammate, who spoke on the condition of anonymity because he feared retribution from the Allen campaign, separately claimed that Allen used the word "nigger" to describe blacks. "It was so common with George when he was among his white friends. This is the terminology he used," the teammate said.

A third white teammate contacted separately, who also spoke on condition of anonymity out of fear of being attacked by the Virginia senator, said he too remembers Allen using the word "nigger," though he said he could not recall a specific conversation in which Allen used the term. "My impression of him was that he was a racist," the third teammate said. . . .

Chris LaCivita, a consultant to the Allen campaign, hung up when a Salon reporter reached him mid-afternoon Sunday. Additional attempts to contact the campaign were unsuccessful. . . .

Shelton said he feels a personal responsibility to tell what he knows about Allen's past, especially now that Allen has been mentioned as a possible presidential candidate. "I got to know Allen a little too well," Shelton said, adding that he does not believe Allen should hold elective office. "He had prejudices that were deep-seated."
-------

A cover story in the Weekly Standard -- written before the above story broke -- notes: "Having just stepped out upon the national stage, George Allen now finds himself in danger of being shuffled off of it."

Well, yeah. And if there is any justice in this world, we can look forward to the same fate for the Republican Party!

'Bringing back the old values' graphic via Jesus General -- who also has the 'Republican traditional values' film.